Saint Monica was an extraordinary woman. Her influence on her son, St. Augustine of Hippo, was so great and important in the early Church, that upon acclamation of Augustine’s sainthood, Monica was also honored with sainthood.

Monica was born in North Africa, in a city called Tagaste, around the year 330. Her parents betrothed her to a pagan, Patricius, who was a worldly and difficult man, and most likely violent towards her. She gave birth to three children, a daughter and two sons. 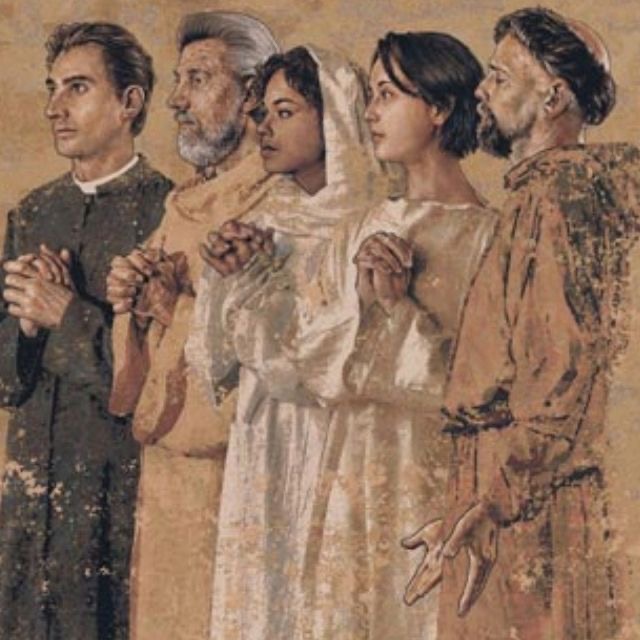 e was her eldest, and at the age of 17, was a student of rhetoric in Carthage. Rhetoric was an ancient form of analysis in effective speaking and writing, with the aim to teach one how to persuade another to one’s own opinion, one’s way of thinking, one’s “school of thought.” Augustine was not a Christian, and he heartily embraced a dissolute life. Monica prayed for him, fasted and kept close to him. She was utterly distressed when she learned that her son had accepted the popular Manichean heresy that “all flesh is evil.” Monica had a very hard time with this, convulsed with rage and despair; but through a dream received the message that in time, her son would come to know Christ. Monica never gave up hope that her son's heart would come to rest in God.

When Augustine was 29, he decided to go to Rome to teach rhetoric. He left for the port to bid farewell to a friend and ended up leaving the country without Monica’s knowledge. She followed him and, upon her arrival, discovered that Augustine had travelled even further, to Milan. In Milan, Augustine came under the influence of Ambrose, Archbishop of Milan. He instructed Augustine in Christianity and eventually baptized him in the year 387. Augustine and his friends planned to return to North Africa to serve in the ministry, sailing from near Rome; and Monica was with them.

It’s been written that Monica’s one desire beyond the baptism of her son was to return to African soil before her death. But it was not to be: she became ill and died at the Roman port of Ostia, in 387.

Saint Monica’s rests in a tomb at the Church of St. Augustine in Rome. In the Holy Year of Mercy, in 2016, pilgrims from Saint Monica had the opportunity to pray there and to celebrate the Mass with Fr. Richard.

Notice a round pot - an urn – at the tabernacle’s left. This pot contains African soil, transported to Italy, providing a partial fulfillment of Monica’s desire; she is interred next to it. 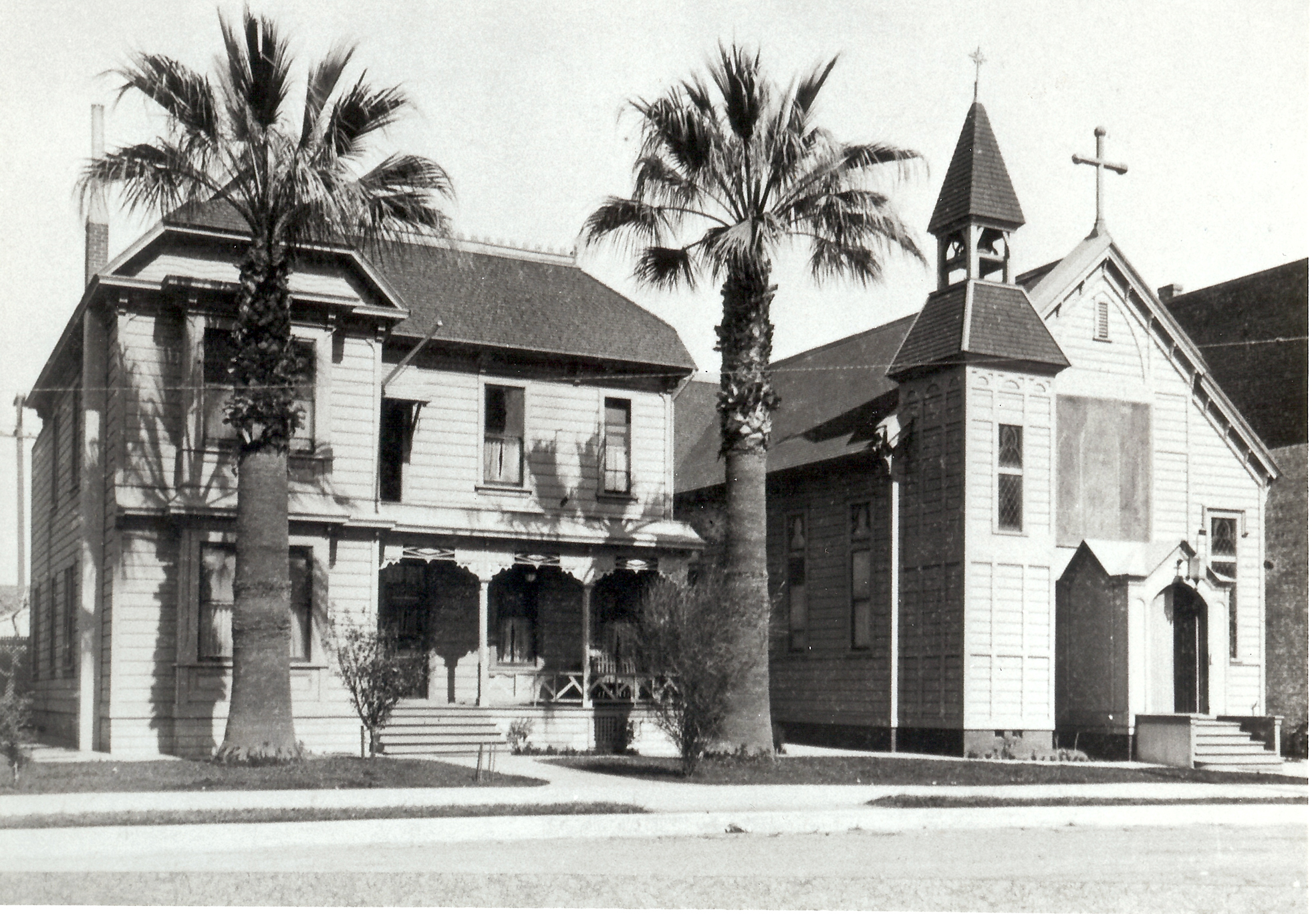 Our city was named after Monica. Fr. Juan Crespi, coming through the area in the 1700’s, saw a local dripping stream. He named it Las Lagrimas de Santa Monica: the tears of Saint Monica, a reference to her intense intercession for her son Augustine before he was a Christian.

By the 1820’s, a grazing permit fixed the name of this area. When a Catholic parish was established in the city in 1886, it was named after the patroness of the city, and our St. Monica Catholic Community was born. 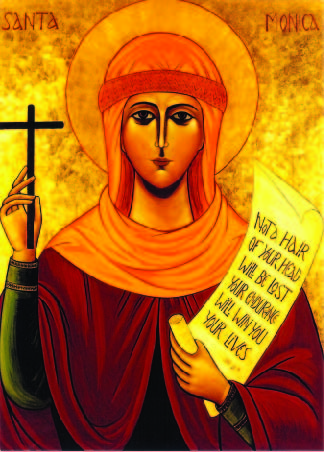 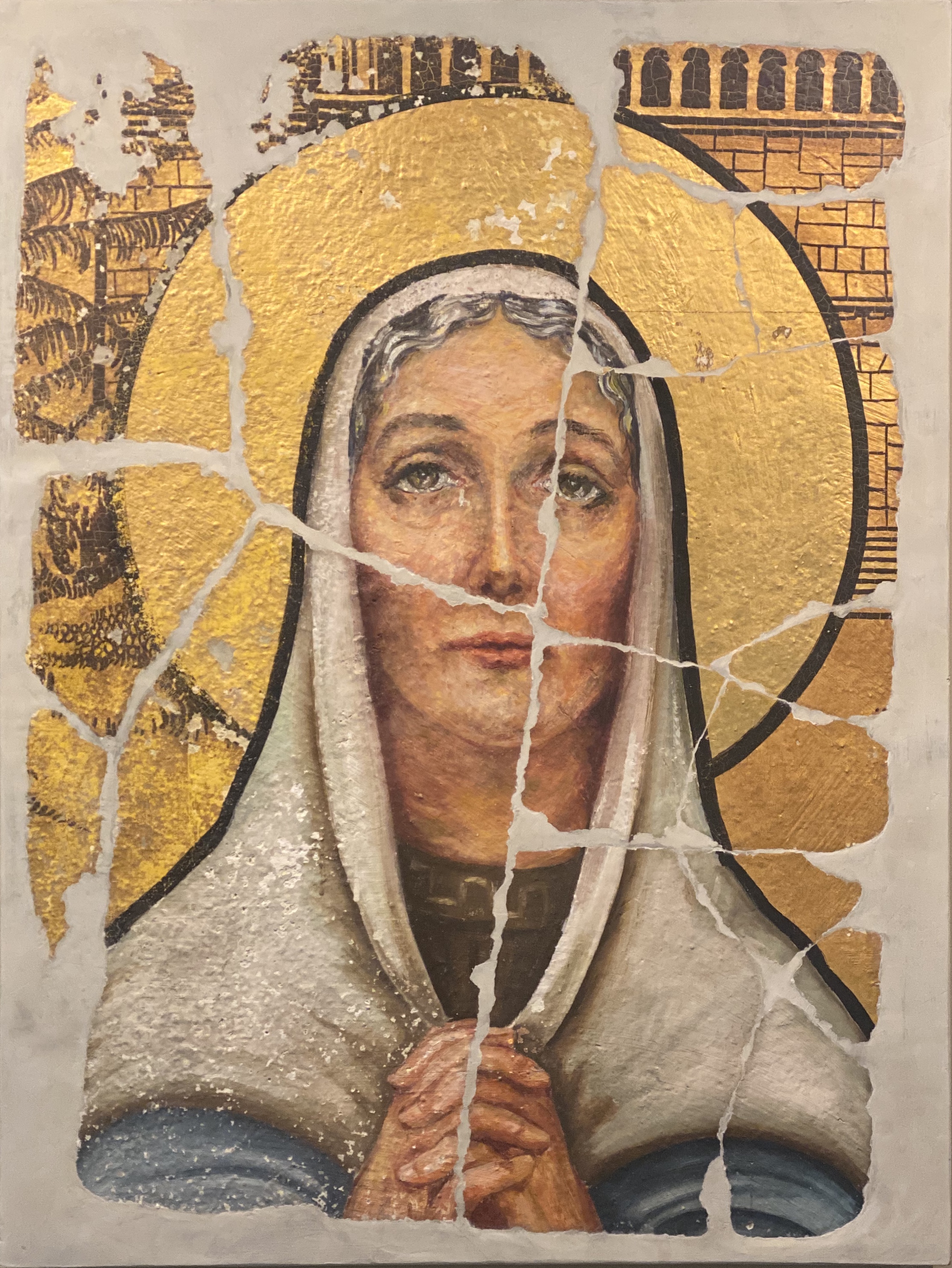 This reflection recognizes the parallels between

Saint Monica’s own experiences of brokenness.

A Modern Painting of Saint Monica

From a Grateful Son

Late have I learned to love you, Beauty, at once so ancient and so new!

Late have I come to love You! You were within me, and I was in the world outside myself….

You were with me, but I was not with You.

-Excerpt, The Confessions of St. Augustine

These searing words from The Confessions of St. Augustine, speak to the immense power of God’s love that pursues us. This love can be near us, surrounding us, and we may not know it. 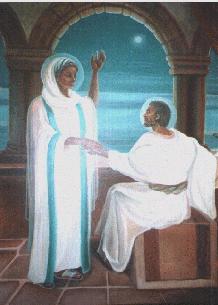 It was not God who was absent from Augustine, it was Augustine who was not attuned to God’s presence.

In Book IX of the ‘Confessions,’ Augustine speaks of his mother, and her influence in his process of becoming Christian.

He writes of the time when he was under the tutelage of St. Ambrose, Bishop of Milan:

Oh, in what accents I spoke to you, my God, when I read the Psalms of David!

Those faithful songs and sounds of devotion permit no swelling pride. I was yet a catechumen and novice in your love, resting at that villa with Alypius, also a catechumen. My mother also  was staying with us—in a woman’s garb but with a masculine faith, with the tranquility of age, motherly love and Christian piety.

Augustine also writes of Monica’s death.  Having been baptized in 387 by St. Ambrose, it was Augustine’s desire to return to North Africa to serve in the Christian community of his birth.

He and his mother arrived at the Port of Ostia, ready to sail for Africa, and she became ill. They had an extended discourse and discussion on the things of heaven, the Christian faith, what his life would be now that Augustine was a faithful follower of Christ, his mother’s one true desire. She was fully prepared, as she fell ill at the Roman port of Ostia, to enter into “her Master’s joy!” Monica’s response to Augustine’s question “What next?” is preserved:

Son, for my own part, I have no further delight in anything in this life. What I am doing here any longer, and to what end I am here, I do not know, now that my hopes in this world are accomplished. There was one thing for which I desired to linger for a while in this life, that I might see you a Catholic Christian before I died. My God has done this for me more abundantly, in that I now see you despising earthly happiness to become his servant. So why do I linger?

It became clear that she would not live, and she said:

Lay this body anywhere; do not let the care for that trouble you in any way. My only request is this: remember me at the Lord’s altar where ever you are.

Her son tells us:

On the ninth day of her illness, and the fifty-sixth year of her age, and in the thirty-third of mine, that devout and holy soul was set free from her body.

They sang for her from the Psalm: I will sing of mercy and judgment to you, O Lord. As they prepared her body for burial soon after.