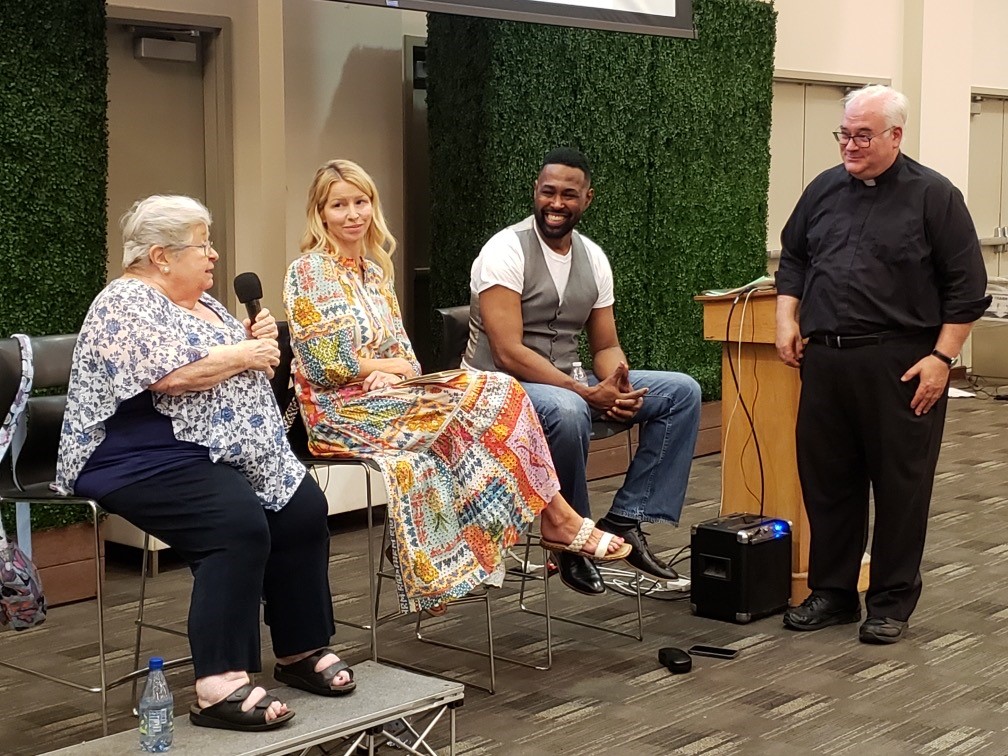 The Sept. 8 Film Club started the season with The Art of Acting.  After a most interesting presentation on the evolution of acting in film, Fr. David Guffey, CSC, National Director, Family Theater Productions, moderated a panel of three working actors who are also parishioners. Each shared tidbits about their roads to the big and little screen, lessons learned, and favorite projects.

After meeting Josef Cannon, the audience is looking forward to seeing him in the new release, Paul’s Promise, in theaters on Oct. 21. The movie recounts an inspiring true story of a bigoted firefighter-turned pastor, who started one of the first integrated churches in the American South in the 1960s. As a youth, Josef was inspired to an acting career by LaVar Burton, who became a household name after appearing in Roots. Josef recently won best supporting actor for Paul’s Promise at the CFF Awards and the International Christian Film Festival. Josef is also known for roles in films such as Hell Hath No Fury, White Elephant, and Debt Collector 2.

Eileen O’Connell’s “reel” was chock full of examples of how her engaging personality captures an audience. Eileen is known for roles in The Gunfighter, Blunt Talk, Sigmund, and the Sea Monsters, The Odd Couple, New Girl, Hot in Cleveland, and About a Boy. She recounted a memorable career experience shooting a Super Bowl commercial with “an unnamed” celebrity. Arriving on set, she was awed to find it was Brian Cranston. Her initial jitters soon gave way to a delightful experience working with this man who turned out to be as genuine a person as he was a supportive colleague.

Peggy Miley’s acting career started as a “hobby” when she was a teacher in New York. Before long, she had a dual career—in the classroom all day and on the stage at night. Peggy’s storied career includes major films (Alice, Suburbicon), TV shows (Stranger Things, Curb Your Enthusiasm), and commercials. A fan favorite is her 1999 Christmas Cheerios commercial where she chats about family with her baby granddaughter over a highchair tray of Cheerios. Fans of the commercial were treated to a 2020 update with both actors reprising their roles while chatting on Zoom about Christmas, family, and Cheerios.

For more information about the new Film Club season visit our website.