This year, the Film Club is all about Oscars! Our Art of Cinema series in January focused on set decoration with a very special guest: Oscar-winning set decorator, Rick Simpson. On February 6, it’s the club’s annual Oscar Night—when our guests will select their choice for Best Picture of the Year! 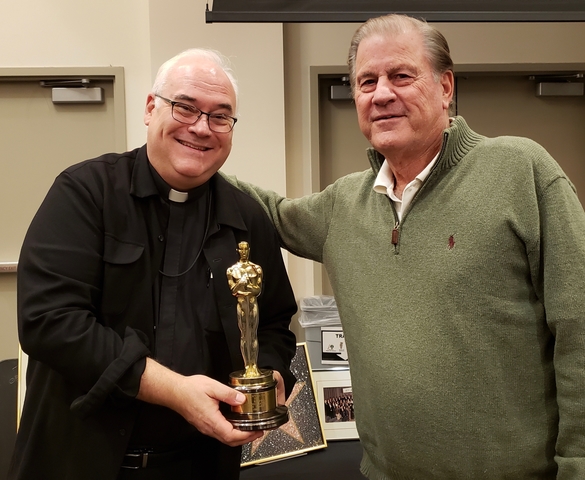 Looking back to January, our screening featured the hilarious comedy, City Slickers—one of the dozens of films on which Rick Simpson worked including Dick Tracy (he won an Oscar for it), Armageddon, Rules of Engagement and The Pelican Brief. Our guest brought along his Oscar and other memorabilia to the delight of our audience. Father David Guffey, CSC, Director, Family Theater Productions, did the interview—and had a chance to hold the Oscar. (He gave it back…reluctantly.)

Moving to this month—Thursday, Feb. 6 is our annual Oscar Night. Check in the Grand Pavilion at 6:30 p.m. and grab some refreshments. The presentation, led by Father David, begins at 7 p.m. and will feature clips from the films nominated for Best Picture. Before the evening ends, we’ll share our views on the films and cast our personal ballots! (Who needs the Academy when we have the Film Club?) The evening will end when “our” winner is announced. No surprise, the Film Club’s movie lovers have an admirable track record in picking the film that will walk away with the Oscar. And, by the way, hear this, even if you haven’t seen the nominated movies, the evening is always a blast for everyone. Join in! Event entry is $10 or $5 for seniors and students.