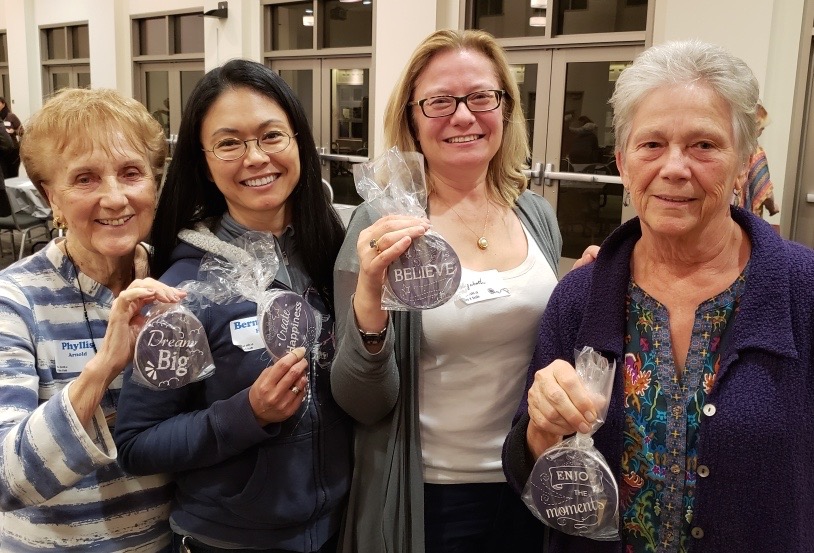 And the winners are (left to right): Phyllis Arnold, Bernadette Futo, Elizabeth Anker and Carol Newlove.
Each won an “inspirational” door prize following the screening of Hidden Figures at the Film Club.

November 8. The Film Club enjoyed the delightful Hidden Figures. The film is based on the true story of three African-American women, who quietly carved a path to success at NASA in the 1960s. In doing so, they helped change people’s attitudes, their own lives and the lives of future generations and, if that weren’t enough, helped launch the U.S. space program as well.

Some 70 parishioners attended the screening. Many commented on the version of America depicted in the film—a period of change and challenge that saw our electing the first Catholic (and young) president to our nemesis, Russia, leading America in the space race. We were a nation reaching for the stars while, at the same time, living with the burden of ingrained discrimination.

Fr. David Guffey, CSC, led the discussion following the film. He remarked how these women transformed the attitudes of those around them not only through their intelligence and hard work but also through their character, values, and faith.

Dec. 13 is the next Film Club event, and EVERYONE is invited to share the holiday cheer as we screen the classic White Christmas. The snow watch begins at 6:30 p.m. in the Grand Pavilion. You never know, it could snow…the most amazing things happen at St. Monica.